Due date for this group order is August 28th, Sunday

I am selling my manga (and an anime) through eBay (although I don't mind selling outside of it as well).

I accept Paypal outside of eBay.

I'm moving out of the country in a few months so trying to get rid of as much stuff as possible before I go. I have more stuff than this to sell but this is what I've photographed so far.

All of these items are in perfect condition, and have been mostly boxed since I purchased them. Shipping is not included in the prices, I can estimate shipping cost on request. I can take payment by Paypal, or by cheque if you're in the UK and would prefer to pay that way.

Prices negotiable if you're buying more than one item. :] Hi everyone! I'm clearing out my shop for back to school, so I'm selling Kawaii Fukubukuro!! It's basically a surprise bag of goodies. ^^ Each fukubukuro will have between 11-14ish items and cost $13 shipped each (I have 6 available). Each will include things like sticker sheets, pencil cases, notebooks, pens/pencils, stamp sets, erasers, greeting cards, deco tape, phone straps, keychains, etc etc. The picture above represents some of the things you might get. Buy a Kawaii Fukubukuro and be surprised with lots of kawaii goodies!! ^_^
Thanks for looking!!!! :)

SALES ~ :))
- shipping is international
- I only accept paypal
- Prices are negotiable
- Shipping are not included
- All in good/like new condition

Ao no Exorcist and Figma


Shipping international and I do also try to find stuff you want!
Always trying cheap prices =D Click here to see the commission!

I WANT
If someone have a Tezuka plushie with around 12 cm please allow me to know
since it's for a "friend"!

My big FMA merch sale is currently on, and there are still a lot of awesome items! Please click --- HERE --- to check out my post if interested ^_^ Thanks!

I also have items from other anime, like Ouran plastic mat, Yugioh! figures, and Naruto book cover. ^_^

( Collapse ) KPOP(Super Junior, SHINee)+Kawaii packs
I'm located in CA, USA.
Everything is negotiable.
Freebies with every purchase!
I take paypal and CC.
I ship domestic and international.
All prices in USD.
Shipping outside of the US may cost more than stated.
Some photos are not mine, ask if you want proof or other photos.
I am not responsible for any lost packages in the mail.

Lots of new items and reduced prices! Most items are BRAND NEW. Don't like the price? MAKE AN OFFER!

I'm in need of some cash so I am selling some English manga, wall scrolls, Shoujo Beat magazines, and DVDs. New listings are expected! Please check out my stuff to see if there's anything you'd like :3

I'm willing to take offers on almost everything I that's up since these all need to go as soon as possible. Now accepting Cash payments. I've slashed a lot of prices by $1-$5. And there are some items up that comes for free with purchases!

Doujinshi: Katekyo hitman reborn, Bleach, D.Gray Man, Suikoden, Fullmetal Alchemist, Durarara!, The melancholy of Haruhi Suzumiya, Kuroshitsugi, Hetalia, and Tales of Vesperia. Most doujinshi are on sale of buy 1, get the 2nd one 50% off. Can be used multiple times

Posters:  2 Bleach (Ulquiorra, Grimmjow), Katekyo hitman reborn from the seasonal sets and chara pos7 set, Karau, Gurren Lagoon, Xenosaga, Jinki:Entend. There is a sale on all posters where they are buy 1, get the 2nd one 50% off. Can be used multiple times

I ship from U.S. and will ship international. You’re welcome to negotiate for a price that fits your range if bought in bulk. If you see anything that interests you, please don't hesitate to comment. Please take a look. Click here for sale page or the picture. My feedback page is here so you'll know its safe to buy from me. Thanks!

1. Final fantasy 13 PS3 version
2. Final fantasy dissidia 012
3. Katekyo hitman reborn posters of any type, can have yaoi in it.
4. Katekyo hitman reborn doujinshi with pairings that can be switched around - 6927, 5927, any Arcobaleno with 27, or has Fran or Bel in it
5. Devil May Cry 4 figurines of Nero and/or Dante
6. Hetalia doujinshi that has AmericaxChina or RussiaxAmerica in it, or has China as the main character
7. Kuroshitsugi doujinshi that has Lau in it
8. Gintama doujinshi with Kamui as the main charater, Gintoki/Kamui, or Gintoki/Takasugi
9. Any Kamui from Gintama figurines
10. Any Len, Miku, or Kaito from Vocaloid figurine

I need to get rid of these items, and I'd rather give them to someone who wants it! Feel free to haggle!

garagesaleleann on LJ is now FlashyTrashySales on blogspot!
I've still got all the same policies and I'm still willing to accept orders through here =]


Come check it out! I've got tons of new items and will be updating the shop frequently.
I have everything from anime, to figures, to manga, kawaii clothing & accessories + so much more!! 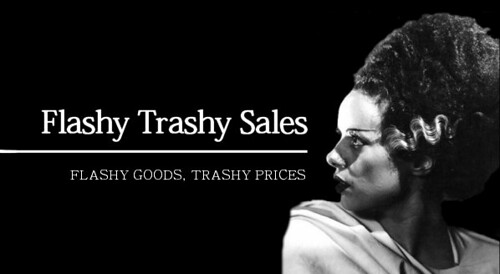 
I am new here to sell some items of Visual-kei bands.


I have four photo-books (Live Tour) of "The Gazette".


Please ask me about other photos or question without reserve.
I can also help you to get other V-kei items on Japanese auction sites.
vkeism@gmail.com


All here in my journal