I am absolutely sick and tired at looking at these books, and I just want them gone!!  So I’m giving them away!!  Just pay for packaging and shipping and the books are all yours! Payments Accepted:  Check, Money Order, Paypal.  If you pay by paypal, you may have to pay additional for fees.

IMPORTANT:  Limit 3 free books per order, additional books $0.50 each.   You may mix and match Japanese, English, and Korean Books.   ALSO!    I may decide to change the price of certain titles, if I feel the need.  However, if you comment with interest for the books before I change the price, you will still get the original price for the books.  I hope that makes sense…

There may be some titles listed here that I actually do not have anymore.   I lost my updated sales list so I don’t know which books I am missing.   It’s too much trouble to re-do the whole list, so just tell me what you are interested in and I’ll go check to make sure I still have it.

I accept Paypal and Concealed Cash (buyer's risk). PP fees will be added to the total. Shipping only to the US. Sorry. ): If you don't like the price, please feel free to offer. Usually ship on Mondays & Tuesdays. (: Thanks for looking!

Wishlist
Devil's Infirmary
A Fallen Saint's Kiss
Beast & Feast
Finder 3+
No Touching At All
Honey Darling
Your Love Sickness
In These Words Vol 1
Just show me what English yaoi manga you have~
Feedback post here! All positive! :D

Recent Gackt stuff! The ribbon came from the June 5th concert in Osaka (it came down from the rafters). The three fliers were found in Osaka also around this time and are in mint condition. Shipping is included, so it's $15 in the USA and $18 worldwide. Paypal ok. Pictures under cut.

I'm sorry for bothering everyone. I've been having the worst luck lately, and well, I don't know how to deal with this buyer. I've looked at several links through Google, and still, I haven't been able to resolve this problem.

She's a buyer from my old nendoroid auction. She caused me some trouble by waiting until 2 minutes near the end of the auction to SNIPE, since I did not include it in the rules and it did not allot me enough time to contact everyone. After getting advice from friends, I decided to extend the auction by 12 hours, but she didn't want that, she said it was "under-handed." She guilt-tripped me into ending the auction when it could have been much fairer to wait for everyone else who was interested.

I know that I'm rather inexperienced with auctions outside of eBay, but I didn't want any conflict my first time :(

After I received her payment, I went out to ship it within 2 days and just yesterday, TWO DAYS after her package was supposedly delivered, she said that I shipped to the wrong address when:

1) She never gave me any other address though private message
2) It was the only CONFIRMED address I saw.
3) I did provide her with a tracking number.

After I sent her a professional reply and restated the facts, she noted me back with insults just today. Not only that, she said that she had TWO confirmed addresses and I shipped it to the wrong one. Is that even possible? I thought that every time you send a seller a payment, you can choose which address you want the item shipped to. Why would I ship to the wrong confirmed address when it was the only one I saw...?

I'm really confused and distressed because I've asked friends and my own mother about it. It sounds like she's scamming me. I'm afraid of her opening a claim against me and not only keeping the funds for part of my summer tuition but the items, too, if it's already been delivered and is no longer tracked.

I would greatly appreciate any help with this matter. Thank you for reading.

Items stated below is available. Pls offer ur price if u r interested.

Pls visit my LJ for more pics and details.

Pls email to me @ idol_items@rocketmail.com for the purchase thanks

Hi all! I am selling my old Pokemon cards (Base, Jungle, Neo Revelation, Neo Destiny) on Ebay. Most of them are in excellent to near mint condition. Mixture of rares, uncommons, holos, Japanese cards, etc. Each card will start at $1.50 and be shipped properly (penny sleeve, top loader, team bag, and bubble mailer). I'm hoping to list up to 60-70 cards by the end of this week. Check 'em out! ^_^ 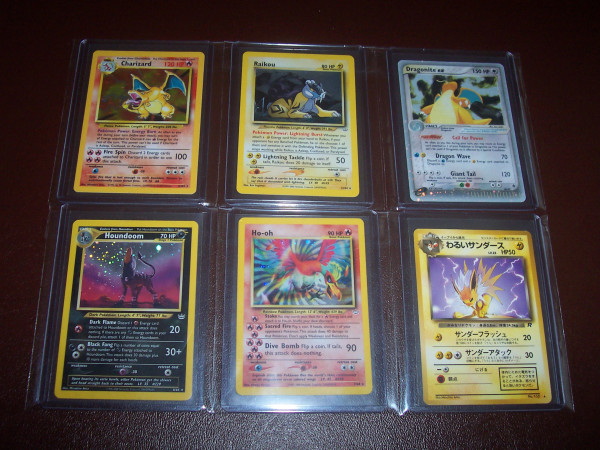 And prices can be negotiated! You can even make me an offer! ^__^